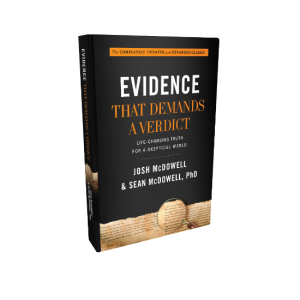 Evidence That Demands a Verdict: Life-Changing Truth For a Skeptical World

Because the truth of the Bible doesn’t change, but its critics do.

Not long after I became a Christian and started living it, I came across a book called Evidence That Demands a Verdict by Josh McDowell. This book changed my life. In it, Josh provided a systematic, cumulative case for Christianity, from the trustworthiness of the Bible to the evidence for Jesus Christ and more. This book was my introduction to apologetics, or making the case for and defense of Christianity. I ended up reading the book so many times that it started falling apart, as well as memorizing some of the statistics for the trustworthiness of the Bible. That copy got lent out to a friend for some research but never returned. So I got another copy, which ended up being the New Evidence That Demands a Verdict. This copy was also read numerous times.

So when I heard that there was a Completely Updated and Revised Edition coming out that Josh was working on with his son Sean McDowell (who is also a noted and excellent apologist), I got excited. And then a friend told me that I should apply to be on the launch team. I did, and then I got accepted. I’ve never been on a launch team before, nor have I ever written a book review, but it’s been an honor and pleasure to read the book early and try to help promote it for the last several weeks. If you follow me, or anyone else who is a part of the launch team, on social media (Facebook or Twitter), we have been posting selected short quotes from this book using the hashtags #readevidence and #trueevidence. 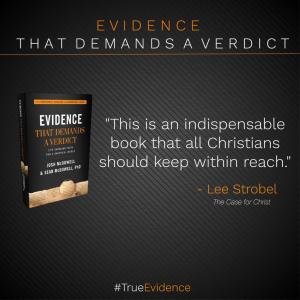 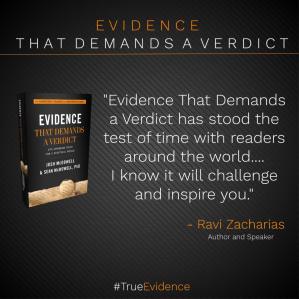 From the opening page, it felt like a new and better edition of this classic. 4 pages of endorsements from noted Christian apologist authors and speakers that I’ve come to know and love through their writings and videos, including Eric Metaxas, William Lane Craig, Justin Brierly, and Michael Licona. Even the Forward, Preface, and Prologue is rich and enlightening.

The first section, The Evidence For the Uniqueness of the Bible, is richer and more thorough than I remember in previous editions, with the five chapters of information that are devoted to that topic being more up to date. Familiar topics like

and the new topic of “Gnostic Gospels and Other Nonbiblical Texts” (I verified all this by comparing The Completely Updated and Revised Edition with the New Evidence That Demands a Verdict version.)

Eight chapters are devoted to the Evidence for Jesus, covering familiar topics like

With two new topics, Is “Christianity a Copycat Religion?” and “The Martyrdom of the Apostles” (the latter based on Sean’s recent thorough investigation of the Fate of the Apostles.) Much of this is presented in a new light that reflects the current evidence and arguments that weren’t in use when the earlier editions were written.

A whole new section devoted to The Evidence for the Old Testament is broken up into 13 chapters, which covers the following topics:

The final section, entitled Evidence For Truth, covers the topics of

On Amazon, this book is already the #1 New Release based on pre-sales alone. There is also a pre-order special going on that if you order the book now (which is 45% off at the time of this writing), you can download two chapters, “The Martyrdom of the Apostles” and “The Historical Existence of Jesus” immediately! Both of these chapters are quite excellent! (You can find details on that here.)

I highly recommend The Completely Updated and Revised Edition of Evidence That Demands a Verdict. It will definitely be a resource that I will refer to time and time again.

6 thoughts on “Evidence That Demands a Verdict: Life-Changing Truth For a Skeptical World”

...integrating Christian faith and knowledge in the public square