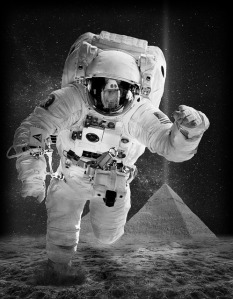 “While successful conspiracies are the popular subject of many movies and novels, I’ve come to learn that they are (in reality) very difficult to pull off.) – J. Warner Wallace, Cold-Case Christianity

How many of you believe or know someone who believes in a conspiracy? Fake moon landings, JFK assassination, 9/11, Bigfoot, and the UFO crash in Roswell are just some of the more popular conspiracy theories. But how many of those believers have really thought about what it would take to pull off a conspiracy? Cold-case detective J. Warner Wallace, former atheist turned Christian apologist and author of Cold-Case Christianity and God’s Crime Scene, talks in detail about the rules for a good conspiracy in his podcast What Every Christian Needs To Know About Conspiracy Theories .

Below are notes that I’ve taken from the podcast (in most cases, just transcribed directly what he’s said). In some cases, I’ll add quotes from chapter 7 of his book Cold-Case Christianity as additional information (which will be in italics.)

What Every Christian Needs To Know About Conspiracy Theories

“Let’s take a look at this claim, and we’re going to do it by looking at the five important characteristics of conspiracies that are required, that must be in place, in order for a conspiracy to be successful.”

Let’s look at these in detail:

lies are difficult to maintain, and the fewer the number of people who have to continue the lie, the better.

Lies are hard enough to tell once; they are even more difficult to repeat consistently over a long period of time. For this reason, the shorter the conspiracy, the better.

“You need a conspiracy that has to held for the shortest or lowest amount of time. If you’re trying to hold a conspiracy for a day, then you might have some success. Try to hold it for a year, it’s tougher because you have a longer period of time in which you can slip up.

“Now think about this. If you have a low number of conspirators who are holding the conspiracy for a short period of time, then you have a chance of getting away with the conspiracy. So for example, if 2 people commit a crime, and at the completion of the crime, one kills the other, then this is a great conspiracy that no one can break unless the person confesses outright. Because you only have one person left who knows the truth and you only had 2 people involved in this crime for a short period of time. So the lower the number and the shorter period of time, the more successful you are likely to be involving a conspiracy or in a crime that requires a conspiracy.”

“There’s a third factor involved, and it’s probably the most important factor: you have to have excellent communication between co-conspirators. Remember, at some point, someone is going to stop you and ask you, “Hey, what’d you do? What’s going on with that day? What exactly were your plans? What happened on the actual day of the crime?” And you, as one of the co-conspirators, is going to be giving a story to the investigator about what actually happened. Now if I stop the other conspirator, or two or three of the other conspirators, and I ask them the same questions, they’re gonna have to be able to answer those questions in precisely the same way that you did. So if you get stopped and give a story, I need to be able to call you and say, “Hey, what did you tell that guy?” Because I need to be able to tell him the same thing.

“Now you might think, now wait a minute, couldn’t we cover some of these details in advance of the crime? Yes, you can. But as an investigator, I’m not gonna stay with just the superficial, top-level kinds of information. I’m going to be asking you the details, I’m going to be getting into the weeds with you on the details because I want to find those little areas that you would have never even thought to ask or to talk about with your co-conspirator. And since you can’t recall this from memory, because you are making it up, I’m going to catch you in a discrepancy between you and your co-conspirator. At some point, the only way to avoid that is to have excellent communication. This is why, if you are standing together when I interview you, that would be great because you are hearing every question I ask the other guy.”

“There’s a fourth category that you really need in place to be successful, and that is, if you can, involve a family member, because you have a bond that transcends even the crime. Family members are bonded to each other in such a way that they are even likely to go to their graves before they’d turn over a family member. Moms, for example, are very unlikely to wave their rights in a Miranda waver to talk to me about a case that may involve their son. Now sadly, this is not always true in the opposite direction. But the point I’m trying to make here is that if I have a strong family bond between co-conspirators, well gosh, it’s a good chance that you’re not going to break that bond because there’s something more at play here than simply involvement in a crime. There’s a family connection.”

Pressure does not have to be physical in nature. When suspects fear incarceration or condemnation from their peers, they often respond in an effort to save face or save their own skin. The is multiplied as the number of c0conspirators increases. The greater the pressure on the coconspirators, the more likely the conspiracy is to fail.

“Last thing. Pressure. If there is no pressure on the co-conspirators to tell us the truth, then standby, they’re not going to tell us the truth. So unless I start to apply some pressure, unless they have some fear of being caught or fear of being punished or in the old days, like a 24 Jack Bauer, where you just do whatever it takes to get the guy to confess. If there’s some fear of death or of brutal pain or whatever if may be, then you have a better chance of getting the truth. So if no one ever even asks what happened, well then, of course no one is going to find out the conspiracy or uncover the conspiracy because no one’s applied any pressure. No one’s ever even asked the questions to begin with.”

So these are important factors that have to be considered.

“Do you have the smallest number of co-conspirators, and holding this conspiracy for the shortest possible time with excellent communication between co-conspirators in a family relationship and no one’s even applying any pressure? Well, you can pull that kind of conspiracy off.”

But if you don’t have all five of those things, then standby, because an investigator like J. Warner Wallace is going to try to exploit what you don’t have in place.

Finally, I close this first part of this blog series with this quote from Charles W. Colson:

“Watergate embroiled 12 of the most powerful men in the world-and they couldn’t keep a lie for three weeks.”

This series continues in Part 2.

Modern Fascism: The Threat to the Judeo-Christian Worldview, pg 108.
Could it be that we curse God when we curse our rulers?
So be careful how you live. Don’t live like fools, but like those who are wise. Make the most of every opportunity in these evil days. Don’t act thoughtlessly, but understand what the Lord wants you to do.
#Repost @shane_pruitt78 with @let.repost

A Biblical Worldview. Jesus is the WAY, the TRUTH and the LIFE

In a time of universal deceit, telling the truth is a revolutionary act. - George Orwell